RIME FORCE MOST ILLIN'- The Force Is Slammin' (MKTS#8) 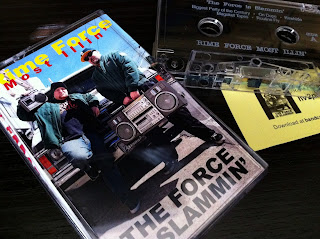 $8.00
Megakut Tape Series #8
If the goal is to tell the concise truth, the Rime Force Most Illin' bio should read as four simple words: We Crush The Set.  If you like JVC Force, Tuff Crew, Krown Rulers, Masters of Ceremony, MCs of Rap, Lejuan Love, Cash Money and Marvelous, Mikey D and the L.A. Posse, Spanish Prince, Tricky Tee, M.C. Rell & the Houserockers, the Techno Hop and Saturn Records discographys, the Bay Area's Chris and Ray, and DJ King Tech's Flynamic Force (just to name a few) you'll get the vision of Rime Force.
If any of the music on that list is foreign to you, go discover it now, and then comeback and bear witness to RFMI's homage to those who made the hip hop sound fresh, vibrant and immediate: The Force is Slammin', indeed.  RFMI is a deadly rap tandem dealing out tag team rimes and routines to set the house on fire, made up of MCs known to keep a mic on their person, Rob Rush [Rec League] and Luke Sick [Grand Invincible/Sacred Hoop], and accompanied by SF's legendary DJ Quest on scratches and a slew of cutty yet critical names on production, including Fatees [Antwon, Sick Sad World], Vrse Murphy [Sacred Hoop, Neila], G-Pek [Z-Man, Gurp City], and Proe [Rec League].
HOW TO BUY

Posted by MEGAKUT RECORDS at 5:25 PM