DREGS ONE & BRYCON - INVASION OF THE CITY SNATCHERS [cassette] 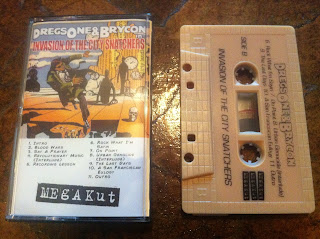 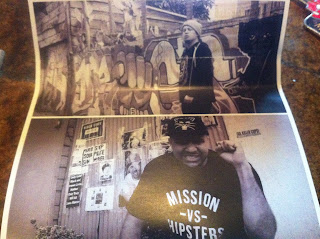 Imagine waking up one day in the city of your birth only to find yourself surrounded by strangers. Whereas the best known iteration of the film Invasion of the Bodysnatchers pitted homegrown San Francisco heroes against clones devoid of emotion, here the conflict is seemingly more mundane yet much more sinister: Dregs One & Brycon versus a mawing army of developers, techies, killer cops & well-meaning liberal apathy. Invasion of the City Snatchers is a call to arms set to a different drumbeat, no army or navy is going to ride to St. Francis' rescue. Instead we are left with two reluctant anti heroes, no clean water and a dusty pail of beats and mics to chuck at the enemy's fat fucking heads.

All songs produced, recorded, and mixed by Brycon
All lyrics written and performed by Dregs One
Mastered by Antonio Gautama Valles for Core of The Earth Studios, Los Angeles
Gold cassette with the red leader for the faithful!
TRACKLIST:
SIDE A
1. Intro
2. Blood Wars
3. Say A Prayer
4. Revolutionary Music (Interlude)
5. Recording Lesson
SIDE B
6. Rock WHat I'm Sayin
7. On Point
8. Urban Genocide (Interlude)
9. The Last Days
10. San Francisco Eulogy
11. Outro

Posted by MEGAKUT RECORDS at 4:48 PM