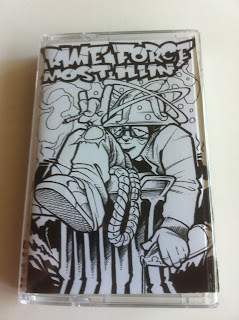 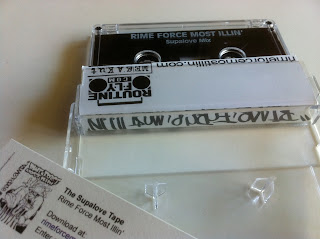 $8.00 SOLD OUT
Megakut Tape Series #7
In conjunction with www.routinefly.com, Megakut has chosen this time to unleash the Rime Force onto an eager public.  Side A is a three-song medley of G-Pek beats with RFMI busting lyrical vignettes over each one, including the slump partyrocker "40 in the Freezer" and a traditionally lurked shoutro (with intro cuts by DJ Raw B).  Side B is a live recording of Rime Force's first show from atop the U.S. Bank building at 22nd and Mission in SF, set-list includes: Biggest Party of the Century, On Dope, Rawhide, and We Get the Most Props- beats by Fatees, Vrse Murphy, and G-Pek; cuts by DJ Quest.  Each tape comes with a digital download card.  This demo is the prelude to Rime Force Most Illin's debut EP: "The Force is Slammin'" coming soon.
DO NOT ORDER

Posted by MEGAKUT RECORDS at 2:30 PM